Everton launched the home kit for the 2018/19 season and NSNO were there before the official reveal to have a good look at the kit and a good feel of it of course.

The new design sees the evolution of the classic Umbro diamond graphic running around the sleeve – bringing the spirit of the past into an exciting modern design.

Set to be worn for the first time in the Blues game against Southampton on Saturday, the kit was revealed via a video and image entitled Go On.  The expression is symbolic of the way in which Everton has constantly moved forward throughout their history – a Club of firsts in a dynamic city that is always looking to the future.

The video is set in the build up to match day and features Toffees from across the city alongside First Team Players.

Everton’s strong bond with its fanbase is demonstrated by the process undertaken to develop the design of the kit. Over the past 15 months Umbro have collaborated with fans to understand their preferences on colour, collar and other design features. Thousands of fans have had input into the process which was also applied to the away and third strips.

Fans overwhelmingly supported a traditional design for Home Kit, with elements that referenced classic Everton kits from the past. To incorporate this feedback the new shirt features Everton blue with iconic white Umbro taping on the sleeve cuffs – a nod to some of the classic Everton shirts of the 1970’s. Alongside this, a contemporary take on a classic collar features with a two-button placket.

Fans also spoke about the importance of Prince Rupert’s Tower, the local monument that features in the Everton club crest, which sits on the nape of the neck. 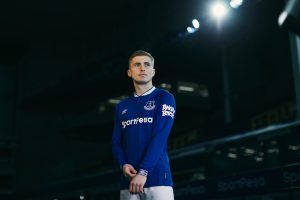 Gary Evans, Chair of the Everton Fans’ Forum said; “The lengths that Umbro have gone to listen to the feedback of fans is impressive and has resulted in what we believe is a really strong design for next season.

“As a fan you always look forward to the reveal of a new kit and this one doesn’t disappoint. This is a shirt that Evertonians will be proud to wear.”

To give a premium feel, the body of the shirt is crafted from a textured marl fabric, with performance mesh panels incorporated for comfort. Unlike many other clubs, the shirts worn by Everton players and supporters use the same design and materials, underlining the connection between the two.

The shirt is accompanied by shorts in clean white with a flash of blue on the elasticated waistband – a classic colour combination also referenced in the fan survey. Ergonomic panels and stretch fabrics aid movement, while on the white socks a cotton foot bed adds an extra layer of comfort and completes the iconic colour scheme beloved by many Evertonians.

Phil Jagielka, Everton First Team Captain, said: “This kit is a subtle nod to Everton’s traditions, but is one that every one of us will wear proudly on Saturday and for the season to come as we look to write the Club’s future.

“When you pull on an Everton shirt you are representing Evertonians everywhere, and for this one to be made up of what they want makes it just that bit more special”.

Speaking about the new kit, Umbro Managing Director Anthony Little stated: “Everton have a special connection with their fans, and for the Club’s 2018/19 kits we’ve celebrated this by collaborating with Evertonians on their preferences and through the Go On video. We’re sure Everton supporters will love the new kit, and we can’t wait to see it in action for the first time this weekend” 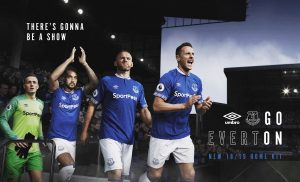 No Nonsense Evertonian that doesn't do all the stats stuff, gives a view of your average bloke in the boozer, can be found normally crying and swearing about Everton.

Latest posts by Bally (see all)