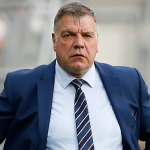 Everton’s – hopefully former – manager Sam Allardyce has given his shortest post-match press conference this season, clocking in a whopping 210 seconds of mostly silence.

Allardyce was beaten by one of his many former clubs, giving David Moyes the opportunity to beat an Everton team for the first time in his career at The London Stadium this afternoon.

During this time in the press conference, Allardyce said, “We could have easily acquired a draw, but I think the quality of West Ham’s two second half goals was the difference.”

And that, as they say, is that.