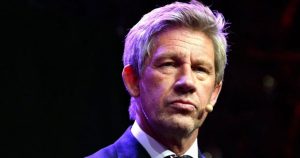 New Director of Football at Everton, Marcel Brands, says he wants to recruit a manager who will fit with the philosophy of the club after the departure of Sam Allardyce.

Brands says that he wants a “modern” manager to work with, which will come as music to the ears of Evertonians who wanted Allardyce out.

“The priority in the first month is the first team and to be ready for the start of the next Premier League season,” Brands said.

“The [overall plan] has to be long-term, though. That’s also the goal I was given in the conversations I had with the Club.

“What the people around the Club will see is new signings but behind-the-scenes there will be a lot of work and, of course, the first thing is a new manager.

“I think it is important that he wants to work in the new philosophy, the new strategy of how we want to work with a Director of Football.

“If you think about what Everton’s plans are, I think a modern coach will fit into that profile.

“Then his philosophy and how he wants to play is important. I think it has to be a coach who wants to work with young players.

“I will take care of the long-term strategy but the first job now is to find a manager as soon as possible and straight away go to work with the squad.”

A new Brands of football at Everton
Brands: We want to keep Gomes
To Top