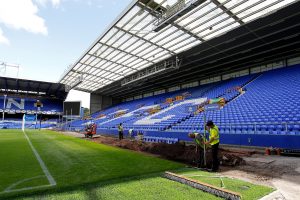 Everton Chief Executive Officer, Professor Denise Barrett-Baxendale, has outlined the key roles and individuals who will form a new-look ‘ambitious and talented’ leadership team at the Club.

The team, titled the ‘Everton Leadership team’, comprises nine executive director-level positions and will be responsible for the day-to-day operations across the Club, supporting the Club’s Board of Directors – and new Director of Football, Marcel Brands – to achieve Everton’s long-term ambitions on and off the field. Most of this team will be based, from July, at the Club’s new head office at the Royal Liver Building.

Richard Kenyon will take on an expanded role to become Director of Marketing, Communications and Community. Richard was appointed as Everton’s Director of Marketing and Communications in 2014. Having also worked for more than four years as a Trustee of Everton in the Community, as well as supporting much of the Charity’s work in his role at the Club, Richard will also take on the position of Chief Executive of Everton in the Community.

Grant Ingles will rejoin the Club in July to take up the role of Finance Director. Previously Everton’s Finance Director between 2013 and 2017, Grant is making the move back to Everton from Liverpool FC, where he is currently Head of Finance. Earlier in his career Grant worked as a consultant in Deloitte’s Sport Business Group and also spent two years in Australia as Finance Director for Sydney FC.

Grant and Alan will also form part of the new Commercial and Finance team structure headed by Board Member Sasha Ryazantsev, who recently took on the role of Chief Finance and Commercial Officer.

Peter Shaw will become Director of Operations and will join the Club this month. Peter has extensive experience in senior operational, commercial and finance roles. His experience includes 10 years at Liverpool FC – including as Assistant Executive Director between 2008 and 2014 – and as Chief Operating Officer at Tranmere Rovers FC from 2015 to 2017.

Joel Waldron becomes the Club’s Academy Director. He has been with Everton in a full-time capacity since 2011. Joel will oversee the Academy operations at USM Finch Farm in an expanded role from his current position of Academy Manager.

Kim Healey becomes the Club’s People Director. Kim has more than 14 years’ experience in leading HR functions at football clubs, including spells at Blackburn and Wigan. She has been Head of HR at Everton since 2015.

There is one remaining position to be filled on the new Everton Leadership team. The recruitment process for this final position of Stadium Development Director is currently underway and will be completed soon.

The new Everton Leadership team will also be supported by a Head of Strategy and a Head of Football Strategy. Richard Battle will be promoted from his position as Head of Academy Performance to the role of Head of Football Strategy. Richard will support Marcel Brands in embedding the Director of Football’s philosophy across all aspects of the Club’s football activities. The Head of Strategy appointment will be announced soon.

Professor Denise Barrett-Baxendale said: “I am really pleased to be able to confirm what is an incredibly talented and ambitious team. The qualities of those people already present in the team are what we are looking for in the individual we will appoint to the remaining position.

“As a Club, it is imperative that we move forward and grow – and I firmly believe this team will give us the opportunity to do that. This is a very experienced, very committed and very able team – a group of people that will be working hard each and every day to make sure we deliver on our Club standard of ‘nothing but the best is good enough’.”