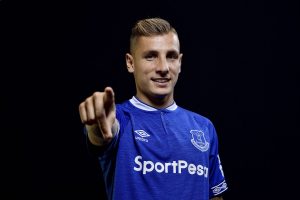 New Everton signing Lucas Digne says he is delighted to get the chance to play for the Blues after signing on a five year deal from Barcelona today.

The French international was revealed today but you’d have got short odds with a  coupon form dafabet as his medical was one of the worst kept secrets this week.

But Digne says he wants to play games and is excited to have the chance to show what he can do in the Premier League.

“Everton is a big club with a great history. I want to play games, win games and excite the fans with the quality of our football,” Digne told evertontv.

“I played good football in Rome and I played well, too, in Barcelona. I progressed a lot as a player and as a person by playing with the best players in the world.

“When you play with the best players it helps you build your character and, of course, it helps on the training ground and during games, too, because you want to give the best of you.

“I want to show my best football here and discover the best league in the world. Everybody loves the Premier League. I am loving the fact I am coming here.

“I am not afraid, I am excited. For me, it is a new challenge to discover a country, a league, people and a great club such as Everton. It is fabulous.”

The 25 year old also revealed that manager Marco Silva was pivotal to his signing, and said that his first impressions had been good.

“My first impression on meeting the new manager was really good. I had a great feeling with him when we spoke,” Digne added.

“Immediately I said, ‘I want to come to Everton.’

“The Club has brought in a lot of players and we are building to bring some success in the Premier League.

“We will work together as a team to try to make this happen. That is what is important and I could not be more excited about this challenge.”

And Everton boss Marco Silva says he is over the moon to get the signature of a classy left back, who will ultimately replace Leighton Baines in the first team.

“It is important to say that he is a player who, from the first moment he was contacted, showed enormous desire to play at Everton,” Silva said.

“He is a high-quality player, aggressive, with good technical ability and in the past five seasons he has played two years at Paris St-Germain, one in Roma and for the past two seasons he has demonstrated his clear quality in Barcelona.

“Lucas is a player who will add competitiveness in a position where we only had Leighton Baines last season and he is accustomed to winning. This is his mentality having captured titles in his career and having these on his résumé.”