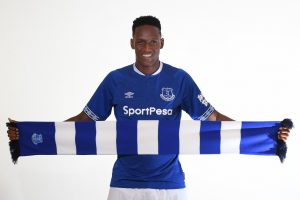 Marco Silva has an exciting squad on his hands and there is no doubt we have a chance to challenge the best in the league as we push for European football.

This step-by-step article will give a guide to our key summer transfers.

We brought in list of top players who will be expected to make big strides this season and none more so than Richarlison. The fee of around £40 million turned a lot of heads at the time considering his fairly underwhelming performances for Watford last season. He has made a fantastic start for us with three goals in the opening two premier league fixtures as the 21 year old continues to improve and could just be a star in the future.

Another key signing was Yerry Mina from Barcelona. He was unable to get a foothold in the Barcelona side, which will come as no surprise making just 5 appearances. However the 23 year old is a very exciting talent as shown in Russia over the summer for Columbia.

He is a big physical player who should be well suited to the league and the £27 million could turn out to be an incredible investment within the coming seasons.

We also signed another defender from Barcelona in Lucas Digne. The French left back is another to struggle to push into the star studded Barcelona side making just 29 appearances in his two-year stint there.

However he has been a part of his national side making appearances at the 2014 FIFA World Cup followed by Euro 2016 in which they went on to reach the final before the defeat to Portugal. He did unfortunately fail to make the 2018 FIFA World cup winning squad as he was only put on hold which may come down to the fact he was not playing regular football at Barcelona.

Portuguese international Andre Gomes was another recruit from Barcelona this season having been brought on loan. This is in order for him to get some regular first team football and at just 25 years of age he is still a very exciting young player. He was part of the Euro 2016 winning squad and has already made 29 appearances for the national side.

Everton will certainly be hoping he can make a big impact in his time in England. The central midfielder could be just the player needed to fill the void of Ross Barkley following his move to Chelsea.

The final key signing to note has to be of Bernard on a free transfer from Shakhtar Donetsk. The 25 year old is a very experienced winger having made just shy of a 100 appearances at his previous club scoring on 14 occasions. He has also made 14 appearances for Brazil since 2012. He is known for his pace and energy so is just the player Everton have been looking for in recent years and could be another name set to play a starring role at Goodison in the near future.