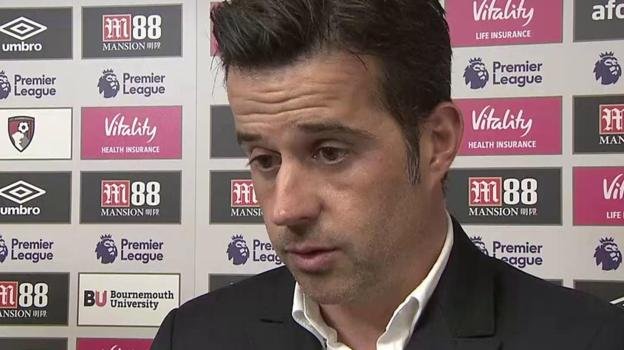 Everton boss Marco Silva says he is unhappy with the sending off of Richarlison this afternoon.

The Brazilian was shown a straight red for appearing to push his head into a Bournemouth players face.

Silva said that although contact appeared to be minimal the forward was foolish to give the referee a decision to make.

He said, “To be clear, it’s [the red card] something Richarlison or the other players in our squad cannot do.
“It’s something I don’t like to see, and at this level even if you’re 18, 19, 20, 33 you have to keep your emotional balance there, keep your mentality as well.
“If someone provokes you or not, if the fans are against you or not you have to keep that.

“It looks minimum the contact, I’m not one to talk about the referee’s decision.

“What I can tell you is about my players and I don’t like them to do that.”