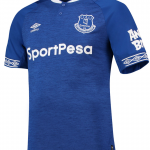 Everton midfielder Gylfi Sigurdsson says he wondered if it was going to be ‘one of those days’ after he missed a second half penalty against Fulham yesterday.

Fortunately, the Icelander bagged a wonderful goal 4 minutes later and then went on to finish off the scoring in the 3-0 win.

He said, “The result was massive for us, especially after the past two games. In the second half we showed what we are capable of and we have got our first clean sheet of the season which is always nice. It was a good three points for us today.

“The feeling in the squad has been positive and we think we are moving in the right direction.

“We have put in some good performances but haven’t quite managed to get the pass or the finish to turn draws into wins. We had that today and overall it was a good performance.

“For a minute, I did think it was going to be one of those days [after missing the penalty]. But something inside of me just said to forget about it and move on. I had to be strong enough mentally to go on and score or set something up.

“Thankfully I have gone on to score four minutes later. That’s always nice and it gave us a bit of breathing space.

“On the pitch it felt like we were going to create chances. It was just a case of making sure we took them when they came.”

Everton boss Carlo Ancelotti has branded the red card handed to Lucas Digne a "joke" after his side lost 2-0 away at...

Ancelotti: James and I have a mutual trust

Everton boss Carlo Ancelotti says that he has a mutual trust with James Rodriguez, who joined him at Goodison Park this summer.

Everton striker Dominic Calvert-Lewin says he is diappointed that his side could not take all three points and maintain the 100% record...

Everton go head-to-head with Liverpool on Saturday aiming to continue their magnificent start to the new Premier League season.

Can Everton go all the way this season?
The Most Educated Everton Footballer of All Time?
To Top