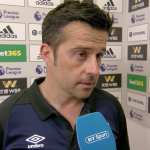 Everton boss Marco Silva says he wants to build something big for the future at Goodison Park, but admits it’s far too early to talk about leaving legacies.

The Blues’ also admitted that his side should have taken more points from the opening four games of the Premier League season.

He said, “It’s not the moment to speak now (about legacies).

“When you’re at a club like Everton you want to be a part of that story. For me it’s really important – it’s a long-term project.

“I want to build something but at the end of the day the most important thing will be the result. Football is always like that but what you want to do in the future is to be part of this big story.

“We should have taken more points than we have in this moment.

“We started well, in our first two or three games despite problems, we played two halves with 10 players, but we performed well.

“We’re building something important in the dressing room, the attitude and our behaviour as well.”