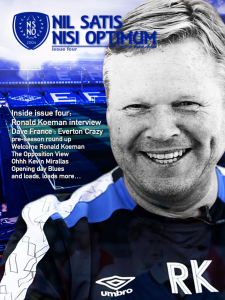 Issue Five – November 2016 – more excellent cover artwork by @JoeDoesDesigns adorns the front of issue five of our fanzine.  Features interviews and features as well as the usual “Opposition View” and a few other special features…

Issue Four – August 2016 – cover art by @JoeDoesDesigns to welcome Ronald Koeman to Everton.  Feature interview with Dr Everton, David France, and features on the new manager and Kevin Mirallas, as well as a look back at some opening day misery!

Issue Three – April 2016 – The FA Cup semi final special!   Exclusive interview with Romelu Lukaku, while also taking a look at what Farhad Moshiri could bring to the club.

Issue One – September 2015 – John Stones cover star, Derek Mountfield interview, Stephen Warnock’s views on the Blues, and much, much more

Order back issues of the NSNO Everton Fanzine here – they won’t be made available online.

In August 2015, we said that for a long time now, we have wanted to produce an Everton fanzine with a difference.  And now, with the help of Evertonians, we have.

Fanzines have been a vital part of the match-day routine for tens of thousands of Evertonians for decades, but the cries of “Get your Everton fanzine” from the corner of the Gwaldys Street and Goodison Road are getting quieter and quieter as time marches on.

Stalwarts like When Skies are Grey, Speak from the Harbour, and Blueblood have all ceased their paper print runs over the last few years, and we miss them.  We’re not alone in that.

The move to digital has left an a5 sized hole in our pockets on match-days, and we want to change that.

We wanted to be able to produce a paper fanzine that will be given away to Everton fans on match-days, which is where you, loyal Evertonians came in.

At the same time as the demise of the traditional fanzine has occurred, there has been a rise in “crowdfunding” across the internet, and we want to use this to finance our first edition – along with traditional advertising streams too.

For as little as a pound, you can help bring this project to life and show your support to giving something back to the Everton community.  A tenner gets you a copy of the fanzine signed by an Everton legend.

We aimed to have this published for a home game at the beginning of the season, and we relied on Evertonians to help us get this going.  If was successful, then we also aimed to publish a further three issues this season, and four the next.

We know a lot of us miss the traditional fanzines, so let’s fill that matchday void and provide thousands of Evertonians with something else to read at half time, or shelter themselves from the rain with on the way home!